The Mechanics of Bonds

This article is on bond mechanics.

Bonds are really very sophisticated IOUs. They are tradeable. All IOUs are. You have all seen the movie where the gambler owes the mob 100,000. His enemy buys the debt from them for 90,000. The mob gets less money but don’t have the hassle of going after him. Bonds are legally traded IOUs after all.

Originally all bonds were bearer, payable to whoever held them, like the notes in your wallet. Bearer bonds are not coming back. They were much better than $100 bills for concentrating money for criminal activity. There were coupons attached and once a year you would ’clip the coupon’ and take it to the bank to get paid. The coupons were annual (now semi-annual). After 10, 20 or 30 years, depending on the length of the bond you would give back the bond itself (the ‘corpus’ or body) and get paid the face amount, usually $10000. It’s easy to see if the coupon was 10%, and worth $100 every year, that if interest rates came down, your bond was more valuable and you could sell it for more to someone who needed more income and was prepared to pay more for your bond to get it. If interest rates went up your bond was less valuable and if you needed cash you would get less. Remember though that at the end of the lifetime of the bond the $1000 is paid to whoever is holding it. Unlike a stock at some point unless there is a default the capital is paid back to the bond holder. This is not true for stocks. Bonds and coupons are all electronic now and paid to the registered owner and they are traded electronically.

Isaac Newton discovered that planets were all in motion due to gravity. Alter one and you alter them all. If enjoyed this and can do enough arithmetic to check your change you can understand bond mechanics (We will avoid equations, or maybe only one because this puts readers off). Unlike stocks and like the planets all bonds trade in relationship to each other. The relationship depends on 1) the length of the bond, ie when it matures. Bonds of less than 10 years to maturity are correctly referred to as notes. 2) the coupon and 3) the quality. Bonds issued by the Treasury are more secure than bonds issued by corporations. The rating agencies, Fitch, Moody’s and Standard and Poors give an opinion on the quality of most bonds.

Like the planets, bonds, or rather the prices are in continual motion, up and down. What else goes up and down? Many things do, including stocks. If some- thing goes up and down this means if you buy when down and sell when up you profit-correct?

If bond prices are in motion, what makes them go up and down? While there are a number of factors the main one is prevailing interest rates. The Federal Reserve bond buying and other activities have an impact but prevailing rates are the most important.

We saw that falling interest rates make the bond prices go up. Let’s do an Isaac Newton and quantify that. Look at Table 1. Here you can see how bond prices increase as rates fall for long dated bonds. Long dated bonds are bought by insurance companies to match liabilities but for others they are trading vehicles for price action. That’s why I buy bonds that will mature long after I am dead. I will sell them for a good profit long before that.

Recently a few countries issued 100 year bonds including Mexico, Argentina and Austria. A one percentage point decline in interest rates produces a huge capital gain for the Austrian bonds as interest rates fall and steep losses for the Argentine bonds when rates go up as in Fig 2.

Decline in Interest Rates From: 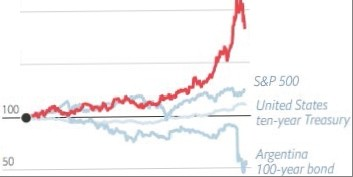 The term for the steep rise in bond value with a decline in interest rates is called convexity. There is a formula for this:

Where YtM is yield to maturity and Px is price. There are of course cheap calculators which have this programmed in. You can calculate both the price depending on yield and the yield depending on price. I for one would be in favour of putting some money into a 50 or 100 year treasury if such were available but they are not, at least not yet.

Naturally there are ways that bonds can be leveraged with options and ETF’s but like all other derivatives is an extremely risky play.

Yields / Inflation / Stimulus
How to ensure your investments beat inflation

If you believe that inflation is really going to take off (we don’t), what should you do? Once again...

Following the kind of stock market blow-out that we are anticipating there will be plenty of high yi...

It seems like the inflationistas are predicting inflation rather than showing data to support it’s e...