The Real Value of Gold

Part of the attraction of buying physical gold is that you can feel it and enjoy it and have an emotional attachment to it.

There is great excitement in the gold market at present. I am sure you are getting plenty of ads from “……..Gold Group” to buy gold. The reasons are always the same. The Fed is printing money and we will have inflation. You can’t trust governments. Gold can protect you against rabies, scabies and babies – so the expression goes.

For good measure you can buy some Bitcoin as well because the government does not control it. Only they do. Bitcoin is electronic and the internet is indeed controlled by governments so that argument is not really true.

Humans have always been fascinated by gold which is one of the heaviest natural elements. It invokes something primeval and emotional in us. That’s why it is used for jewellery and ornaments. Historically it was used as money informally, and formally as recently as 1971 when the US came off the gold standard - although countries had come off and on before - including Great Britain. It was in fact Britain’s relationship with the gold standard that precipitated the problems of the 1920’s which lead to the economist John Maynard Keynes calling it a “barbarous relic”.

If you are going to invest in something and want to be successful you need to do a bit of reading. Here at Macrotomi we never tire of telling people that. It’s possible to get rich by luck- by winning a jackpot but unfortunately this does not happen for most people. Unless you inherit wealth you are going to have to put in some physical or mental effort. The same is true for investing in gold.

The finest analysis of the role of gold as a source of value is the book, “The Golden Constant” by Roy Jastram. It was first published in 1977 but has been updated by Jill Leyland. He initially analyzed prices relative to the price of gold from 1560 for England and from 1800 for the USA. Up until 1970 the price of gold did not go up with inflation despite the Napoleonic wars and World War I which like all wars are inflationary. The reason is that the price of gold was pegged. It was true money and like cash it proved to be a deflationary hedge (Fig1). In 1971 the gold standard was abandoned and the price of gold begin to float and has now become an inflation hedge, even if somewhat erratically (fig 2)

Gold's relationship to prices and purchasing power changed greatly in 1971 when the US went off of the gold standard. Post 1971, Gold has risen with rising prices and has kept it's value as an inflationary hedge, generally keeping a close correlation.

Today, the price of gold has accelerated, but prices have remained fairly stable (July 2020 CPI: 0.6%) - so this tells us the price accelaration and purchasing power have digressed from the mean. 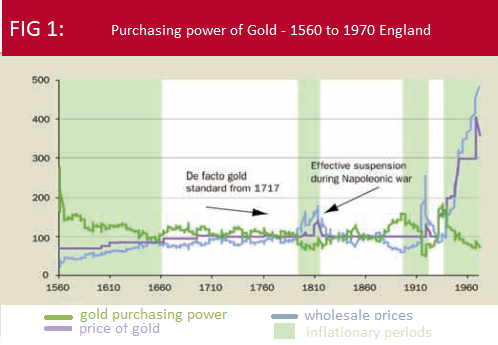 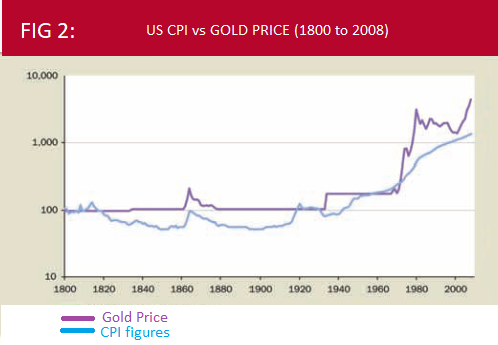 Over long periods the price of gold will overshoot and undershoot the level of prices, not unlike the prices of anything else that is widely traded. That is why gold is very rewarding at times and very unrewarding.

The individuals who promote it however, tend to be very disingenuous. At one stage it had industrial applications and so it became an industrial commodity. Then it was promoted because the Asian community likes gold jewellery, then there is a gold mine strike in South Africa or Australia or wherever. When the purchasing power gets ahead of itself the prices will come down. We think this point is coming soon (Fig 3). 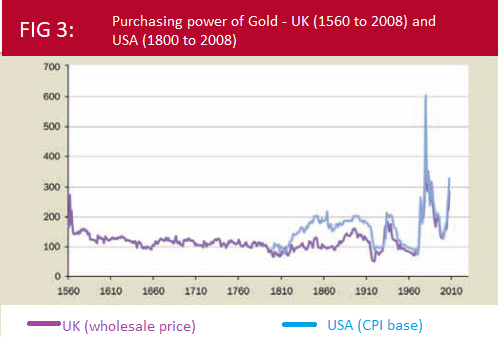 We mentioned in a previous article (read: Historical Precedents are important lessons for investing) that the failure of platinum to follow the price of gold should be a point of concern for all gold investors as it is rarer, and until recently, more precious than gold. Part of the attraction of buying physical gold is that you can feel it and enjoy it and have an emotional attachment to it.

In fact it appears that many people tend to fall in love with it. The problem with falling in love is that love is often unrequited, and that’s when the problem begins so that you may find yourself reciting ‘gold, gold, you’re making me old’ as investors did from 1980 to 2007, and that’s a long time not to have your affections returned.

Yields / Inflation / Stimulus
How to ensure your investments beat inflation

If you believe that inflation is really going to take off (we don’t), what should you do? Once again...

Following the kind of stock market blow-out that we are anticipating there will be plenty of high yi...

It seems like the inflationistas are predicting inflation rather than showing data to support it’s e...